The Internet of Things has the potential to change the world as the Internet did decades ago. Big corporations clearly understand this! Microsoft, for example, is planning to invest $ 5 billion over the next five years, while the world spendings on IoT, if estimates are correct, will exceed $772.5 billion this year. At the moment, Connected Industry is leading in a global share of IoT projects with 22%, followed by Smart City with 20%. Smart Energy and Connected Cars have both 13%, while others have less than 10%. IoT solutions are already impacting our lives but there are still some major challenges for companies that want to be a part of a connected future.

Security is a primary concern developing IoT solution because all devices are operating through the internet and by this become vulnerable for cyber attacks. As smart devices enter people’s lives they obtain personal data and know everything about users, so you can’t stress enough on the importance of security. Often developers rush their solution on the market without taking enough time and effort to deal with security issues. To prevent this scenario, you should have a decent budget on security, and even employ a dedicated security expert in your team to work closely with the project manager from the very beginning, if possible.

Connectivity issues like latency or poor network reception in devices could ruin the whole concept of IoT. Transmitting correct data in real time without delays is crucial to get valuable information and credible insights. This becomes a big challenge when a large number of devices are connected, and if one main server breaks down, the network becomes useless. To solve this issue, data processing should be decentralized and shared among devices.

Compatibility of hardware devices is another important concern. Majority of IoT solutions are integrated into a legacy system, adding more complexity with different firmware and M2M protocols and limit the choice of hardware manufacturers. The more the scale of the IoT project, the bigger of an issue it is. As a result of this, enterprises are forced to use hardware from the same manufacturer as their existing devices integrated into the system. There have to be more investments into software development of solutions, that will make hardware devices from different manufacturers work with each other.

The lack of skills is an issue that companies face all the time. Among 500 professionals working in the IoT industry, only 20% of them say they have the necessary skills for IoT development. The short-term solution to this problem will be to train employees through workshops and training programmes. But to make a change in a long-run, there has to be an educational system to motivate people to get involved and be proficient in this domain. 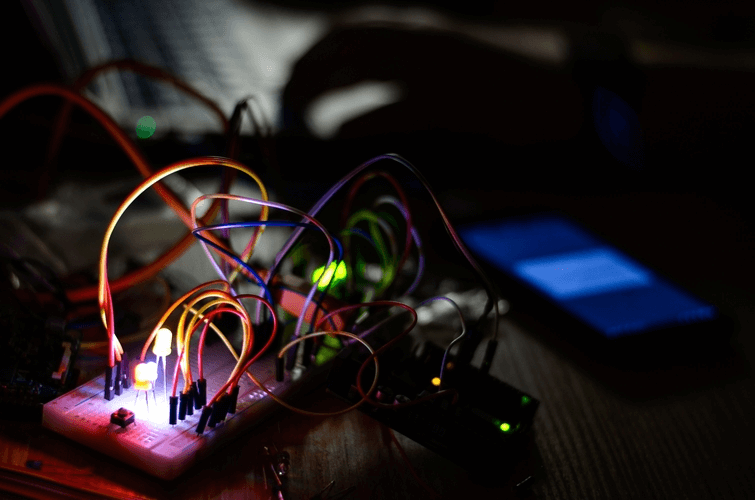 Proof of Concept is a starting point for all IoT projects – this is a stage to determine whether the product will perform functions it is supposed to do and be successful. This is when hardware prototypes are built with development boards like Arduino or Raspberry Pi, and applications are written. Unfortunately, this is when 60% of IoT projects stop, according to a survey by Cisco – ultimately the success of certain IoT project depends on developers skills and experience in IoT development to make the best of the technology and to know what is possible. IoT projects require top experts – senior software developers, engineers and architects, professionals that are best at what they do. You should plan your budget wisely to afford specialists with hourly rates from $ 50 in Eastern Europe to $ 300 in the USA who can actually make your goals a reality.

Collaboration between business and IT sides are another huge factor that influences the fate of an IoT project – according to a survey at IoT World Forum, 54% companies consider the connection between IT and business departments a crucial factor of the successful result. In fact, only 15% of business executives are thinking of their IoT project as a success, while 35% developers are fully satisfied with a project, proving that there is still plenty of work to do to satisfy both sides and have their goals and expectations met. The lack of interest in a product on the market is another reason why 42% of the projects fail, so to avoid being a business leader facing a financial letdown with IoT initiative, you should work hard on market research, find out the use cases for the product and clearly understand how you actually are going to earn money with it: long before you even think of beginning the development. It’s crucial to put in some effort and know your customer. Employing experienced business analysts and developers will make it easier for you. In addition to that, you can cooperate with IoT vendor on this.

Does that mean you should pass on IoT development because it’s too risky and costs too much? Well, If you do this, you could miss the IoT explosion! According to 61% of Cisco respondents, the technological revolution is only just begun. Benefits for businesses from cutting-edge tech have barely begun to scratch the surface. You don’t have to build complex Smart Home system that cost a few million dollars to enter this market. You can start with just a prototype. If your solution stands out among competitors on the Home Automation market, you will find investors quickly. Get help from outsourcing developers, or even another company to build IoT system you want.

How do we know it

Here at SPD-Group, we understand the challenges and do our best to deal with them. We make your business part of the connected future. We develop complex multi-protocol IoT solutions spanning from Smart Home to a Smart City. Our in-house team of full-time Engineers, Researchers, Sensors Experts, and Data Scientists are working with trending technologies like Computer Vision, Machine Learning, Cloud Computing to achieve tangible business results out of custom IoT solution. Contact us if you have any questions or ready to get started with your own project.