The Space Needle is an observation tower in Seattle, WA, the U.S. The construction of the tower was completed in 1961, and it has since become a must-see landmark in the State of Washington. In 2000, as a result of multimillion-dollar renovations, the tower’s facilities were expanded to include the SkyCity restaurant, SpaceBase retail store, and the Skybeam. The Observation Deck was overhauled. It was added lights to and repainted.

Currently, the tower has three levels, each of them delivering a different visitor experience. For example, the highest level has a zoom camera that takes photos and videos of a visitor from a distance of 1,500 feet (or 500 meters). A mobile app could enhance this experience and make it more comfortable. In January of 2018, our long-term client approached us to build a mobile application for the Space Needle tower.

Without the mobile app, the visitor flow was not so smooth. A conventional photographer was hired to take photos. After visiting the Space Needle, visitors provided their contact information through a touch screen at the exit and received their photos by email. Introducing the mobile app would automate this process, while adding Augmented Reality features.

The initial deadline for the project was six to seven months. The client wanted to launch the completed app as soon as possible. We decided to build the application by using React Native that allows building cross-platform mobile solutions. This framework was not very popular in early 2018. Because of this, it was sometimes impossible to find certain libraries, which resulted in some of the project’s tasks taking significantly longer to complete.

To achieve the set business goal, we joined forces with our client (and, more specifically their product owner who was the Vice President of Engineering at the Space Needle), and the GuestX team that also worked for our client. GuestX helped us interact with Space Needle’s media system remotely and updated APIs at our request. We handled the actual development of the mobile application and Content Management System from scratch.

At the time the Space Needle approached us to help with the project, we already had a team of experts who were completing a project in React. Within a month, these experts learned the basics of React Native, switched their focus to the development of mobile applications, and became the core team for the Seattle Needle project.

To meet the strict deadline, our team worked 12 to 13 hours a day during an entire month. Our team was motivated to deliver the best result possible, so they put in a lot of overtime as a way to speed up the development. The main reason for the overtime was the fact that React Native was still a nascent technology that required a lot of custom solutions. Here is a quote from our project team’s Team Lead:

“Building an app in React Native was a big challenge because the community of developers was very small at that moment. This framework was lacking out-of-the-box solutions that established programming languages and frameworks usually have. Our team was forced to come up with our own unique ways to deal with the challenges. One of those memorable challenges was a Panorama feature — a view from the highest point of Space Needle tower. The visitor should see the 360° panorama of Seattle through the app with added pins pointing to restaurants or museums, for example. React Native couldn’t handle a 360° view, so we had to connect hundreds of photos to make this function work properly as the client had envisioned it.”
Tymur Mustafa – Team Lead/Project Manager

Integrating Augmented Reality into the React Native application was also very challenging because AR used Unity. To connect React Native with Unity, we needed to code a native bridge by using the programming language Swift. To make this happen, we added native developers to our team for a couple of weeks to write the bridge. This was a time-consuming process, but we managed to live up to the client’s expectations and provided the desired functionality.

The Space Needle app actively tracks geolocation data in the background, which was the reason why the placement had previously been denied multiple times. We managed to discuss all the details with Apple within a week’s time, uploaded the app with all the available functions, and made it available for downloading.

The mobile app uses Augmented Reality, 4D, and other camera effects. Among some other features, it includes:

The first release of a fully functional version of the mobile application that included all the basic features took place in July of 2018. The client was pleased with the result, both in terms of the UI/UX design and the app’s functionality. The internal user acceptance testing (UAT) phase began immediately after the application’s release. The mobile app was soon launched for visitors, and we provided a 2-month guarantee period. Four months later, the client requested our team to expand the application with some new features and make it even more stable, which led to the second release of the app. Here is what the user interface of the Space Needle mobile application looks like: 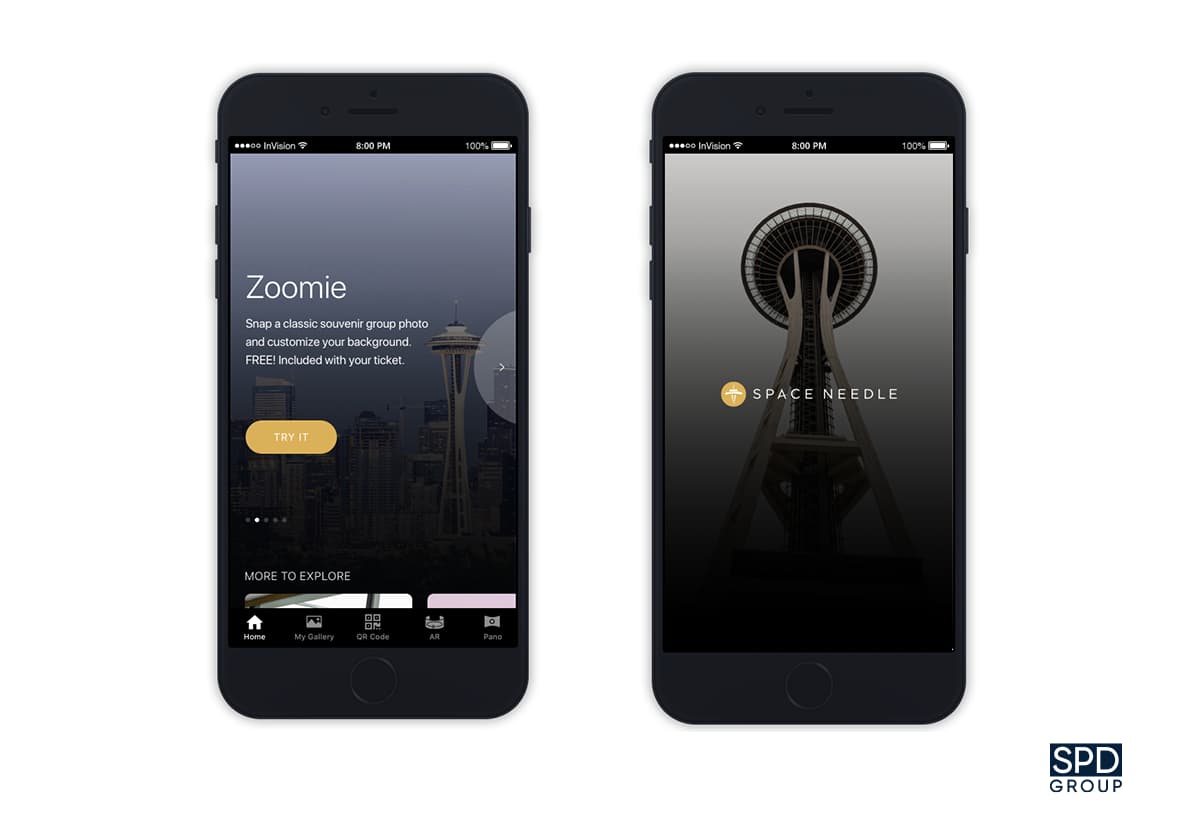 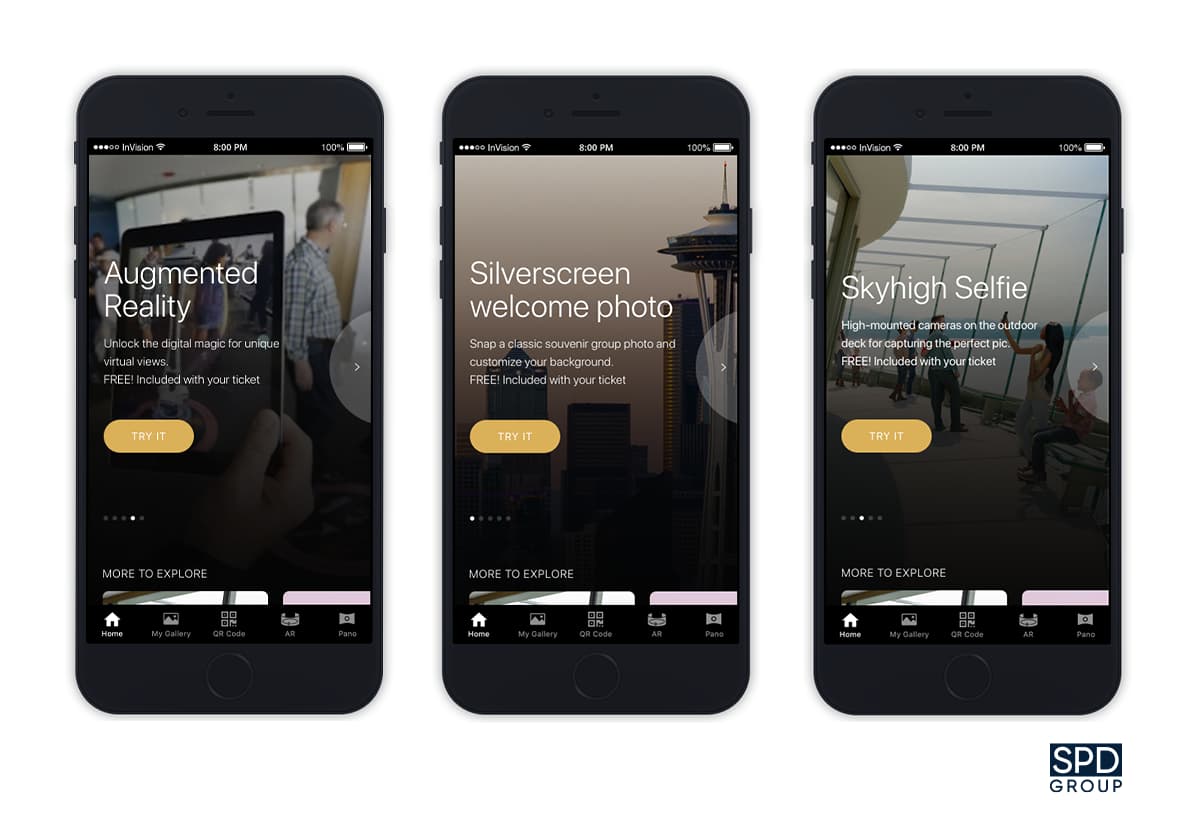 The Space Needle app is currently available on Apple Store and Play Market. In 2019, it was downloaded almost 1,000,000 times for both iOS and Android, becoming very popular with visitors to the tower.

Space Needle was impressed with the performance of our team and offered us another project. Currently, our experts are working on the complete redesign of the Space Needle tower’s media platform, ticketing system, and software for physical devices. Our involvement in the project eliminated the need for the client to work with any third-party vendors. The success of Space Needle’s mobile app helped us become their full-cycle development partner.

Contact our experts to get a free consultation and time&budget estimate for your project.